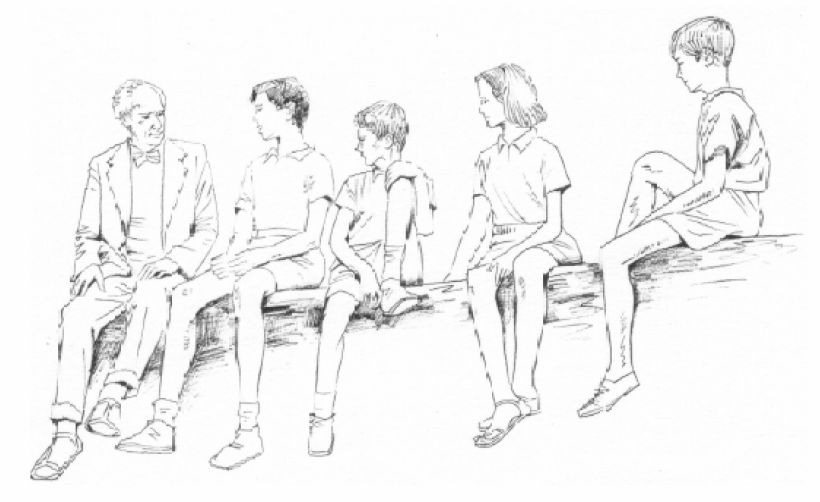 The benefit of instruction

The idea may be effective as a marketing strategy, but have you ever heard anyone play piano after their sixth lesson? In reality nothing is learned that quickly – except perhaps how to bake a cake. Yet even a chef would say that the cookery class shows you the basic techniques, but from that point on it’s a matter of practise, a matter of baking the same Victoria sponge a few thousand times before you’ll be performing reliably in the kitchen.

Learning tennis can also be described in a half dozen moves equivalent to the methods of baking. The ball may be sent across the court by a forehand, a backhand, a serve, a volley or a lob. But only a facile assessment by means of those prevalent reductions called “competencies” would be so daft as to pronounce the pupil a tennis player after a brief course of lessons encompassing the moves. Nor would we recommend that after being shown the procedures, the apprentice should simply continue practising. Building the skill of ball placement needs guided rehearsals over many years. Wimbledon pros retain their trainers. And if Ian Thorpe needs a coach to guide him through the water, then we can all use a pair of good Alexander Technique hands to continuously refresh our manner of use.

The procedures for learning the Alexander Technique are as brief and simple in outline as those for baking or tennis. If in cake-making we say step one is: “First grease your tin,” then “First free your neck” would be the equivalent when our object is improved co-ordination. The remaining half dozen steps in AT are as plain, but they are learned more gradually as the pupil changes his or her habitual way of moving. You can go to cookery class and learn the basic techniques in a week or two, and thereafter hone your skills over dinners and tea parties on your own. But learning how to change the way you move requires more monitoring.

Because your kinaesthesia – your muscle sense that makes you aware of how much tension you are using – is desensitized by over-use, it is not possible to assess by means of your proprioception – the sense that tells you where the parts of your body are in relation to one another – the ways in which you are pulling yourself out of shape, and how you must set about rectifying things. In theory it is possible to learn the Alexander Technique on one’s own because, after all, F M Alexander did. But people who imagine they can re-educate their use without a teacher, have not recognised the genius of the man. He himself commented that, although it took him ten years to discover how to make the necessary changes for his larynx to function normally again, it would not take his pupils so long to heal themselves because they would have the benefit of his hands to guide them.

More than a sum of parts

Alexander Technique is taken up in the same way as you might take up a musical instrument or a sport. You may read about its provenance and its history; peruse manuals of theory and related subjects such as human anatomy and the mechanics of animal movement; you observe the movement of others, and you have regular lessons to develop better ways of moving yourself. If you are young and fit, you may want to train to a level of good use appropriate for teaching others.

Partly because it deals with movement as a whole; and partly because, like tennis, its procedures are few, the Alexander Technique may appear to deliver less than, for instance learning piano, which is richer in elements that build technique – scales, chords, arpeggios, rhythm – while its intellectual aspects encompass the studies of harmony, phrasing, touch and other stylistic features. But anyone who practises an art or a sport discovers that the number of its parts does not reflect the experience of its sum. More doesn’t always mean more. Feeling the thrill when the ball unites with that part of the racquet from where only the wish is needed for precise placement of the ball; or being carried along when the music seems to play itself, are experiences arrived at equally whether the medium is complex or simple. The study of mathematics and the practise of meditation can both deliver bliss. In the same way that tennis at championship level has evolved into something rather more than patting a ball over a net, the skill of sitting and standing in accordance with the structural design of the human body transforms into a wonderful lightness of being.

All trainings need teachers, instructors, guides or coaches. Because the Alexander Technique is taught in a less-familiar way, we will correlate what we can with instruction in baking, sport and art. As the burnt sponge cake emerges from your oven, the experienced cook can point out where you went wrong and give tips for your next attempt. It’s a straightforward business of making alterations in the assemblage of ingredients, quantities, consistencies of mixture, temperatures and baking times. Similarly, the tennis coach will analyse the movements you are making with your limbs and eyes that determine ball placement, and with what force and spin. Advice is then given verbally which it is up to you to interpret and follow.

The piano teacher also observes hand and arm movements while he listens to the sounds you produce, and introduces you to aspects of musicality that are building the new language of your developing ear.

A different way of teaching

The Alexander Technique teacher does some of the same things, that is, she observes with her eyes what movements you are making. But mainly she feels with her hands what you are doing. The process is not in fact so localised, but rather her hands act as the terminals of a neurological circuitry between your body and hers that helps her to recognise with her more finely tuned apparatus what is going on in yours. Different distributions of muscle tension give characteristic patterns of strain or ease. When muscle fibres contract, pulses of energy are given off. Relaxed muscle is quieter. Recognising the best mix of quiet and noisy muscle in a body is the equivalent of recognising from experience the optimum consistency for a cake mix, or the qualities that render a sonata more musical.

The tension mix is felt by the teacher’s whole body which in turn counteracts the wrong pulls with messages from her own better balance. Like many things that are evident in life nobody really knows quite how it works. But experience confirms that when the hands of a body that is opening out – or, in Alexander language, one that is “going up” – are placed on the muscular wrapping of someone who is shortening and narrowing, they stimulate it to release and open out. The experience can feel much like relaxing but without collapsing into a sagging shape. It would seem to be a sort of recognition response similar to the one that spreads smiles or yawns through a group. A good pair of Alexander-trained hands gives you a feeling of load shedding. Lengthening and widening gives you an experience from where you can discover what you habitually do that pulls you down. You learn how to tune in to your body so you can collect more reliable information from your proprioceptive and kinaesthetic senses. The teacher’s aim in tuning in to her pupil’s body is the same as that of the tennis player who is acquiring the fine co-ordination that will hit the ball plumb in the middle of her racquet every time.

Just as playing a piano or tennis might look easy, it looks and feels as though the Alexander teacher isn’t doing much. You may watch her lift somebody’s leg and remember the feeling of your own leg having lengthened when she did that to you. But you cannot just l pull a leg and be doing the same thing at all. It looks simple , but the teacher is doing other things with her own body that have accumulated from her experience – the things that give a sum of parts that has become something other than the mere contact of her hands. Try drawing a violin bow across strings and you’ll realise there’s a bit more to playing the instrument than at first appears. To elicit a beautiful sound from dragging taut horsehair across catgut fibres, or to be opening your shape while bringing your hands together on a body sandwiched between them, takes lots of lessons and years of practise.

Practise is feeling and finding, and above all, paying attention. Its aim in Alexander Technique is to elicit and sustain the improved co-ordination in all situations.

Of course all learning is with a view to eventually shedding one’s instructor, but that may be later rather than sooner, as the restoration of your proprioceptive and kinaesthetic senses to more reliable function along with the growth of a strong back take persistence over time.

One step at a time…

You would shy of asking your teacher to show you how to play a Rachmaninov concerto on your first piano lesson – or even after six. You would understand that years need to be spent working up the necessary skill to do that. Yet we expect to be able to do something as intricate and demanding as sitting down and standing up when the neuromuscular mechanisms for effecting this constantly-performed movement are in very bad condition. In teaching the Alexander Technique we use this seemingly-simple movement because it is, on the contrary, complex and it requires a high degree of balance and strength in the postural musculature for harm-free execution. It is the movement most frequently performed by the able-bodied in everyday life. Maintaining good use while moving within the vertical plane, for instance in walking, is a relatively simple accomplishment. But the serious business in human movement lies in learning to maintain length while lowering the body groundwards.

How long will it take you to learn to sit well? Can we be guaranteed to emerge as accomplished musicians from our piano lessons? However liberally descriptive the prospectus of the course of study we embark upon, we can never know the answer to this. Just how we come upon our “eureka” moments cannot be known before the fact, and will be arrived at in the learner’s own time.

Learning good co-ordination may not appear to deliver as generously in satisfaction as learning to play a musical instrument or to cook well. But use of the self is the skill that all others depend on when maximum performance and minimal damage is the goal. Its rewards are therefore infinite. As with learning anything, you will swim around in a sea of incomprehension, enjoying the process most of the time, but also sometimes feeling frustrated and bored while gradually accumulating understanding, and slowly lightening like a perfect Victoria sponge!

© Christine Ackers 2007. All Rights Reserved.
02 9331 7563 www.ate.org.au
Drawing made from a photograph of F M Alexander with a group of his pupils circa 1945 in America.
Drawing made by Jing Sheng Wang